Students who attend his GATE or ArtReach enrichment classes in acting at regional PA Cyber offices know him as Mr. Rolly, the theater instructor. Younger PA Cyber students might also recognize his voice as the character of Sensai in Little Lincoln online classes.

What they probably don’t know is that Shaun Rolly is a man of many roles - stuntman, actor, director, playwright, and …. Pirate! (A theatrical pirate, of course, not a real one.)

He is a specialist in staging theatrical fight scenes, such as the fight between Javert and Jean Valjean in “Les Miserables,” and Hamlet’s sword fight with Laertes in Shakespeare’s tragedy. Rolly has directed fight scenes for American Ballet Theater at the Metropolitan Opera House, Galway Theater of Ireland and Harvard University.

His connection with PA Cyber came about through his position as a resident artist at Lincoln Park Performing Arts Charter School, which, like PA Cyber, is based in the small town of Midland in western Pennsylvania. At Lincoln Park, he teaches classes in acting and stage movement, everything from fighting to character acting to playing a clown and doing pantomime.

For several seasons Rolly played the part of Drosselmeyer, the magician-like character in Lincoln Park’s production of “The Nutcracker.” Most recently he has been directing fight scenes in this season’s Lincoln Park productions of “Les Miserables” and “Night of the Living Dead: the Opera.”

Amy Zachewicz, PA Cyber fine arts supervisor, said there is always a good turnout for Shaun Rolly’s GATE and ArtReach classes. “No matter what he’s teaching, the kids will sign up just because he’s teaching it – he’s like a rock star and the students just adore him,” she said.

Well, of course – everyone loves a fearless, rascally, swashbuckling pirate!

Fifteen years ago, Shaun Rolly was booked on a flight to New Orleans for a vacation. The flight was cancelled at the last minute because of flooding at the destination.

Little did he know how that accident of fate would change his life. His travel agent offered alternative destinations, among them Las Vegas. In Vegas, Rolly saw Treasure Island Hotel’s pirate stunt show and sat through five consecutive performances.

“I was mesmerized. Right then and there I decided I wanted to be a pirate,” he said.

That show led him to enroll in stunt school and learn staged combat. It did not, however, lead directly to his dream of becoming “a professional pirate.” To achieve that, he had to write his own pirates play.

Three years ago, while serving as entertainment director for Pittsburgh’s Gateway Clipper riverboat fleet, Rolly had the idea of staging a musical pirate show as dinner theater on a river excursion.

He discovered that, aside from comic operetta, there aren’t any pirate musicals… so he wrote one himself: a “full-bodied” pirate drama, complete with realistic sword fights and action within the confines of a ship’s deck, which, after all, is not much larger than a stage.

For the music and lyrics, Rolly reached out to a friend, Paul Shapera, who was living and working in Serbia. Collaborating by email and Skype, Shapera wrote and scored 17 songs for the show.

Rolly’s show, “A Pirates’s Tale,” has played the past two summer seasons to Pittsburgh Gateway Clipper audiences, and now is being shopped as vacation fare to other cities. He also is looking for a theatrical company to produce a full two-act version as a Broadway-style stage show.

Like many performance artists, Shaun Rolly continues to find new roles that are suited to his talents.

He has been cast in a recurring role in a new dramatic TV series, “The Outsider.”  Filmed this past summer in western Pennsylvania, the series is to air on the WGN America channel in January 2016.

The plot of the show pits a rough, backwoods, mountain family against encroaching oil and gas companies.

“I’m playing Jack the Hunter for a clan in the mountains of modern-day Kentucky,” Rolly said.

The role suits Shaun Rolly. Isn’t an outlaw mountain man, after all, just a pirate minus the water? 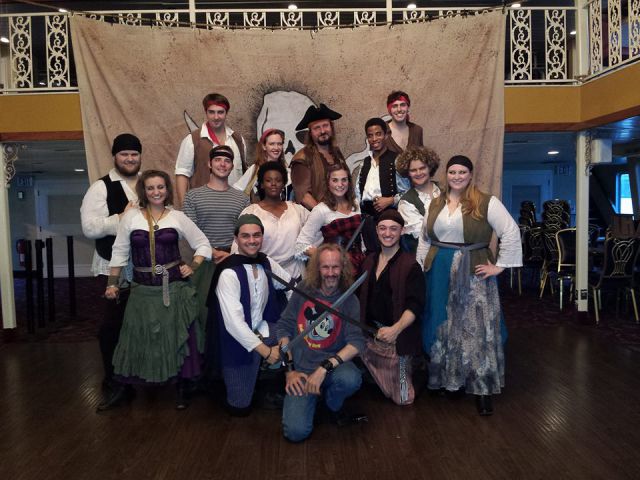