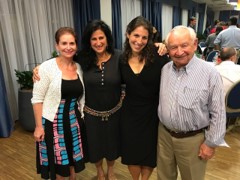 American History and Civics teacher Whitney Conjeski recently returned from Poland, where she participated in an intensive, weeklong, Holocaust education professional development seminar. She is now using that experience to enhance her students' understanding of the historic event. Following is an account of her journey.

Whitney Conjeski stepped off a plane in Warsaw and was whisked away to the Okopowa St. Jewish Cemetery, the first stop on a weeklong educational opportunity to study the Holocaust in Poland.

Moving past old and new graves, she visited the last Jewish cemetery in Warsaw that was connected to the Warsaw Ghetto. Her group then went to a portion of where the Warsaw Ghetto wall still stood.

The PA Cyber social studies teacher was chosen by Classrooms Without Borders to visit Poland from June 25-July 3 as part of a professional development seminar focusing on Holocaust education. Classrooms Without Borders is a non-profit educational organization in association with the Jewish Federation of Greater Pittsburgh that offers public school teachers the chance to attend for $1,000.

"This was a once-in-a-lifetime experience," said Conjeski, who found out in January she was chosen from numerous applicants to the program. "Going with the historians and giving us that input, it was so much more...honestly, I felt like I was stepping back in time being there."

Conjeski, a Beaver resident, teaches American History and Civics, and talks about World War II in her classes. She found out about the Classrooms Without Borders opportunity from her mother, Pam Learn, a sixth-grade social studies teacher at Beaver Area School District. Her mother also went on the trip and works with the Pittsburgh Holocaust Center in her classroom.

In all, 15 students and 25 educators and administrators – college professors and superintendents—from various states went. Conjeski has a personal interest in World War II and the Holocaust. She previously studied the Holocaust and developed her pedagogical practices, attending the Belfer National Conference for Educators in 2015 at the Holocaust Museum in Washington, D.C., which focused on effective instructional practices for students to learn about the Holocaust.

Leading up to her trip to Poland, she attended monthly meetings and pre-departure workshops in Pittsburgh. But she says nothing could have prepared her for the emotional toll the experience took.

During their week in Poland, the group was accompanied by 88-year-old Howard Chandler, a Holocaust survivor.

Treblinka Extermination Camp
On Tuesday, their second day, Conjeski said they went to Treblinka Extermination Camp where Chandler's mother, older sister and younger brother were sent and killed upon arrival. Chandler was young, about 13 at the time, and should have been taken with his mother, but got false papers and was instead taken to Auschwitz-Birkenau to work. His dad also had paid a Catholic neighbor to hide his little brother and gave him all his valuables. When they were rounding everybody up, Chandler recounted how he saw his little brother in the crowd. He couldn't understand why, growing teary just talking about the boy.

"Just being there with him, I couldn't help but cry," Conjeski said.

They also visited Nozyk Synagogue, the only pre-war synagogue still standing and operating in Warsaw, where they learned about Jewish life then and now.

Majdanek Concentration Camp and Lublin
On Wednesday, they went to Majdanek Concentration Camp, a small camp that was overrun by Soviet troops before the Nazis had time to cover up the evidence. What stood out to Conjeski was that the crematorium could be up and running today within 20 minutes. A memorial that sits right next to the crematorium is 45 tons of human ash left from the time of liberation.

"Today, you can still see fragments of bones," she said.

They then went to Lublin, a small town with one lamppost left from the Jewish quarter. They toured a Jewish museum that is working to commemorate Lublin's former Jewish population. Conjeski said the museum has items that have been found and still today they are finding photos and other keepsakes in the attics of Catholic Poles, items that Jewish neighbors had asked them to hide.

"Howard fought for five years to get a plaque to memorialize the Jewish people that were killed. Several years ago, the outgoing mayor said they had three months to get a plaque up. They recognized it this year and had a ceremony to remember what had happened."
They also stopped at Kielce Synagogue and met with psychologist Bogdan Bialek, who taught them about the Kielce Pogrom, a violent massacre of Jews in the southeastern Polish town that happened a year after the end of World War II.

Auschwitz I and Birkenau
On Friday, they visited Auschwitz I and Birkenau with Chandler, who discussed how he was almost killed three times. Once when he tossed his dad his sweater and a sniper shot at him; the bullet buzzed past his ear. He was friends with someone who got to work in the kitchen and by chance was able to get a few more pieces of food. Though it's a lot, he makes it a point to go back every year. His daughter came too. His wife is also a Holocaust survivor, but won't speak about it.

Jewish Culture Festival in Krakow
Saturday was more uplifting. They went to Krakow's old Jewish Quarter and saw remnants of the Ghetto wall. They also met a righteous gentile and heard her story. In the evening, they attended the Jewish Culture Festival, one of the oldest and largest events of its kind in the world. About 15,000 descendants attended. At dinner, Chandler ran into a fellow survivor he met while he was held in Birkenau. Their meeting wasn't planned, same as last year when they also stumbled upon each other. Both men sobbed upon seeing each other and showed their numbers. Then they sat and talked.

Through the shared experience, Conjeski made connections with other teachers across Pennsylvania and the U.S. They still swap information and resources, and are working to translate their experience into the classroom.

This month, they'll meet up for a wrap-up session and discuss ideas to present the information, including the chance to hear Chandler's story, to students. She hopes to open discussions between peers within PA Cyber and other schools.

Conjeski is also working on interactive 3D maps of her trip, with the help of a 360-camera she used while abroad. After mapping out her Poland experience, she hopes to expand the map with World War II locations in general.

"I hope to have that for the students to find out information. It's always going to be a work in progress, because you can add so much to it," Conjeski said. "I also have other ideas floating around of reaching out to the students and teachers that we met in Poland and working out something extracurricular with that...there are tons of ideas that I'm playing with."