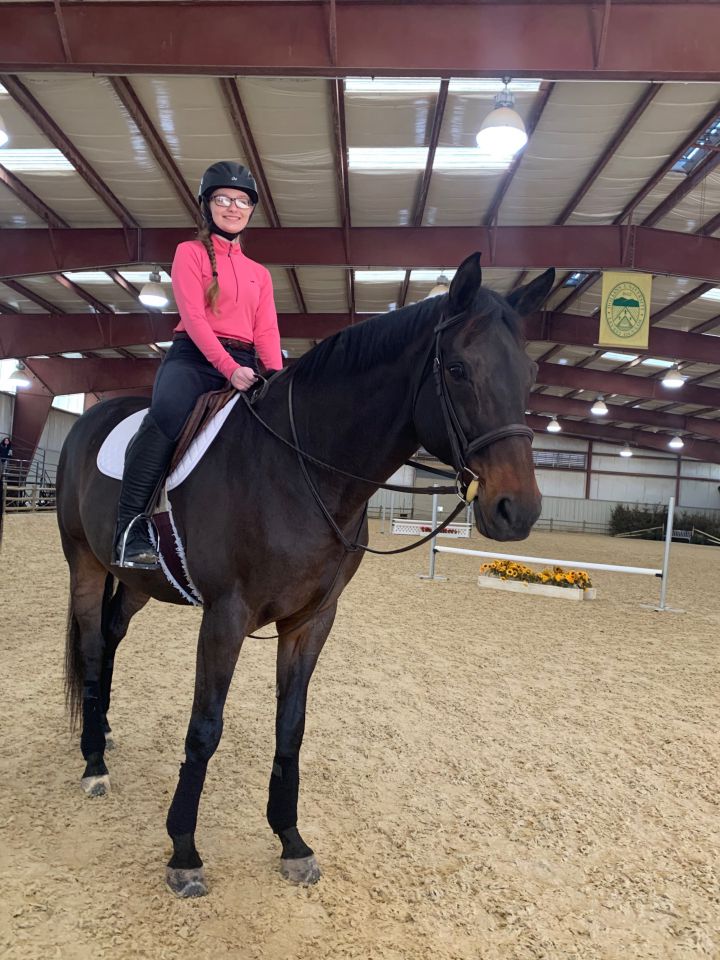 When Morgana Costanzo's family moved from Wilkes-Barre to a new town, she and her younger siblings were severely bullied at their new school.

"We dealt with different forms of bullying," Costanzo, a senior from Preston Park, said. "For me, I was picked on. I was called names. I was physically bullied—basically a little bit of everything."

She was an eighth grader when her parents, Chris and Sarah Costanzo, transferred her and her siblings, Rhiannon and Paden, to PA Cyber. Finally, all the bullying they endured stopped.

Just when everything was going well her freshman year, she and her family were dealt another blow. A small bump appeared on her forehead. It would require three surgeries.

The first surgery involved removing the bump and sending it for tests. Results indicated cellular dermatofibroma, a noncancerous, but aggressive, tumor. A surgeon then removed the scar and surrounding tissue fibers from her forehead. She kept a positive outlook, viewing it as a blessing in disguise.

"I would have had to have scar revision surgery anyway because it was pretty bulky and it was right in the middle of my forehead," she said.

A few days after that surgery, her incision began healing and was barely noticeable, like a super fine scratch. Unfortunately, test results came back positive again, requiring a third surgery. This time, the incision was lengthened and spanned about half of her forehead, she said.

"It was pretty big and gruesome. The surgeon had to take out muscle tissue underneath and a deep amount of surrounding tissue. It healed well, though — now you can barely see it," she said.

Costanzo said the experience was "really hard" and would have set her back academically were it not for PA Cyber.

"Being in PA Cyber really helped me through that period, because I didn't have to miss as much school."

She said her teachers understood what she was going through, she was able to schedule appointments around classes and, because she was in blended classes, she could work at her own pace.

"I would go in and catch up on whatever I missed when I had been at the doctor. If I had been in a brick-and-mortar school, I definitely would have been affected academically and gotten a lot of bad grades. I don't know if they would have given me as much time to make up work and I probably would have been picked on for it too. Being in PA Cyber really helped me get through it quickly and heal in a positive environment."

Costanzo credits her academic advisor, Chuck Zielinske, for helping her throughout the ordeal.

"He would talk to me and let me know I was doing a good job and helped me through it. If I needed anything for my classes, he made sure he put it through, and he looked out for me," she said.

Zielinske shuns taking credit, instead attributing her achievements to strong family support. When he first started working with her, he remembers that she was shy and reserved.

"Fast forward to now and she is president of student council and constantly volunteering in clubs and programs," he said.

At the same time, she is taking advantage of college in high school classes. Last year, she enrolled in everything that was available to her. This year she's taking two advanced placement classes.

"PA Cyber offers so many different courses and programs, and the college and advanced courses help with getting a taste for college and preparing for after high school," she said.

By her sophomore year, Costanzo was on student council and inducted into the National Honor Society. At her old school, she remembers that cliques mainly determined who was in a club, which meant student council wasn't a possibility for everyone.

"I went out for student council when I was in seventh grade and I made some posters and a little slogan. We had to do campaigning," she said. "Who got selected was very limited. One girl from my class was picked and she was one of the popular kids."

"This is something that makes PA Cyber really great. Everybody who applies to NHS has a fair shot of being in it, and it's the same with student council. That has been really exciting and something I thank PA Cyber for because I didn't have the opportunity to do any of those things at my previous school."

She also volunteered for IMPACT, a program PA Cyber offers to allow high school students to tutor elementary and middle school students for the Pennsylvania System of School Assessment.

When she spoke on behalf of PA Cyber at the National School Choice Week rally, she underscored these opportunities and how, during difficult times, the school surrounded her with a caring support system and compassionate, accommodating teachers.

Last year, when her mother faced health issues and needed surgery, she and her siblings completed their classes in the waiting room, again staying on track academically.

"PA Cyber has been a real blessing to our family, allowing us to get through tough times without the kids' schooling suffering," her mom said. "I love having a great relationship with our teachers, advisors and administrators, who are like family to us. We're all on the same team and support one another. The kids see that example being set and follow it."

Her dad, Chris, said he works a lot and missed out on so much when his kids were younger, but PA Cyber has given them more time together as a family. He's grateful for that.

"The kids have the ability to work around their school schedules and do other things, like tagging along to work with me, which is great," he said.

A few years ago, he was hired to be part of a renovation at a restaurant that was showcased on Food Network's "American Diner Revival." That's when Costanzo, whom the show's producers dubbed "Small, but Mighty," got the opportunity to work on the set and get a behind-the-scenes glimpse of the process.

Foundation for the future
Costanzo and her family appreciate the opportunities and support PA Cyber offers on so many fronts. Her AP history teacher, Stephanie Skinner-Hinton, came out to support her at a college-in-high-school event last year. The year before, Mary Crapis and Alesha Yaria, NHS coordinators, gave her the chance to speak at the induction ceremony, which was a confidence booster because, up to that point, she had never spoken publicly. Plus she was able to use it to bolster her college and scholarship applications.

Only 600 NHS scholarships are awarded annually and thousands of students apply. Costanzo said Crapis continuously reminded her to complete and submit her application for the NHS scholarship and, along with Yaria, Zielinske and PA Cyber CEO, Brian Hayden, supported her through NHS.

"I was notified in late March that I was selected as one of the 2020 National Honor Society Scholarship recipients," she said, "and am a National Semifinalist. I am feeling incredibly honored and grateful to have been chosen and am very excited."

On the heels of learning of this exceptional award, she got word that she won a study abroad scholarship, which she may undertake her junior year in college,

"I hope to study in Ireland my junior year, working with animals and being involved with the horses in the stable there," she said. "I plan to take advantage of as many opportunities as possible when it comes to trips and internships. I am hoping to go on a J-term trip to Saint John in the Caribbean to study sea turtles."

Costanzo received three additional scholarships: academic, creative talent, and math and science, and has been accepted to the pre-veterinary program at Hollins University in Roanoke, Va. She plans to attend graduate school for veterinary medicine and eventually open her own practice. She lives on a small farm and enjoys animals. Once, she set her sights on being a paleontologist, but that changed a few years ago.

"I've always loved animals so much and I realized I could do a lot more good helping living animals rather than studying dead ones— as cool as fossils and everything are to me. I still enjoy fossil hunting as a hobby and doing research. I find it very interesting, but I found a real passion in helping animals," she said.

Her mom said she's always been an amazing kid. "She's been an absolute joy to raise, and it's incredible to see her grow and come into her own."
Zielinske said Costanzo always tries to help others and make them feel included.

"She brings such a positive vibe that, when you speak to her, it brightens your day because of how optimistic and enthusiastic she is about life," he said. "Anyone who meets her is a better person for it. She's a special student and is going to do great things in the world." 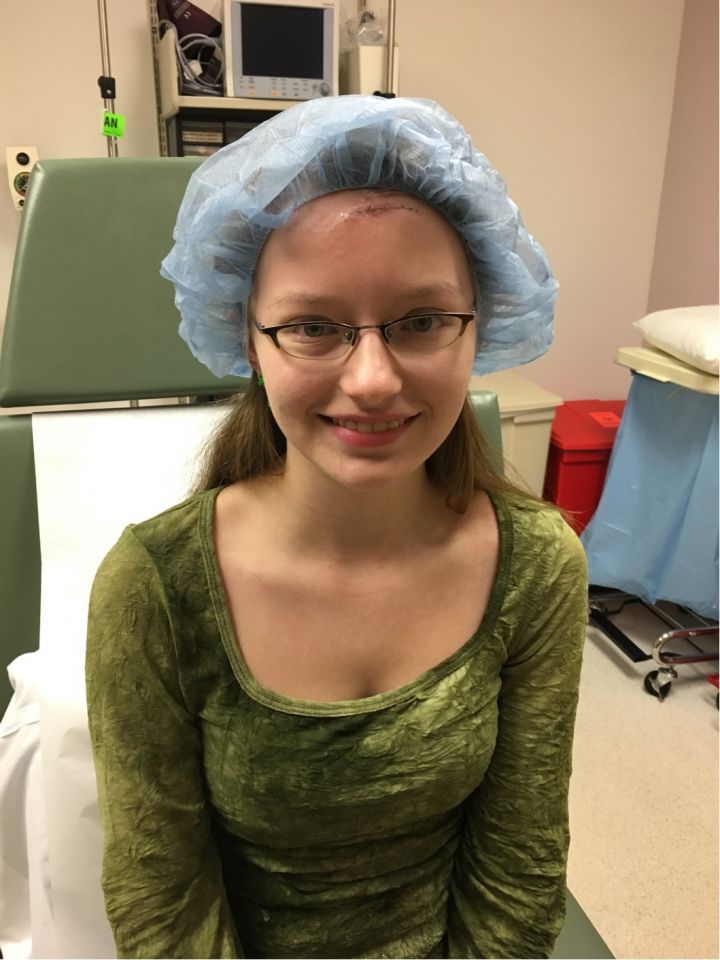 Morgana after her second surgery during her freshman year at PA Cyber.  In ninth grade, a small bump appeared on her forehead, which turned out to be a weird tumor. It required three surgeries to fully remove. 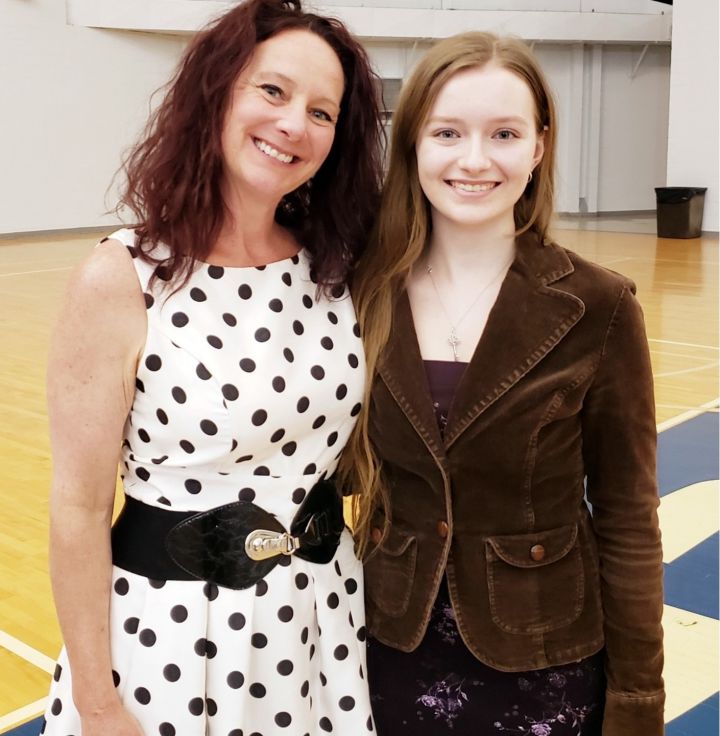 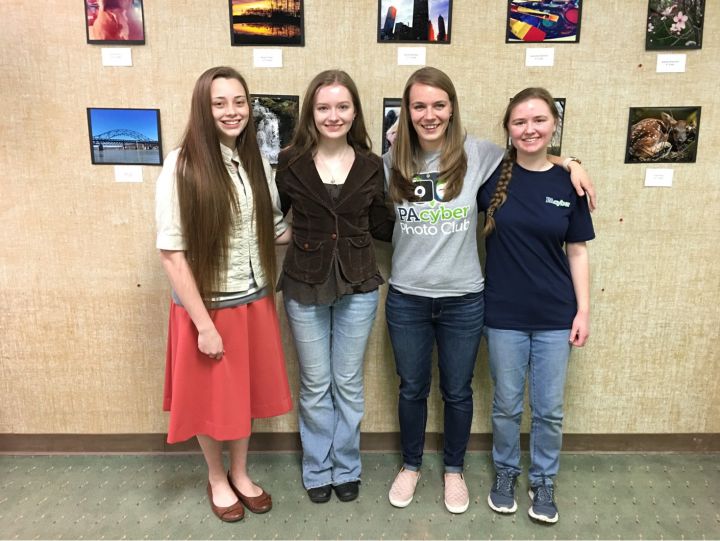 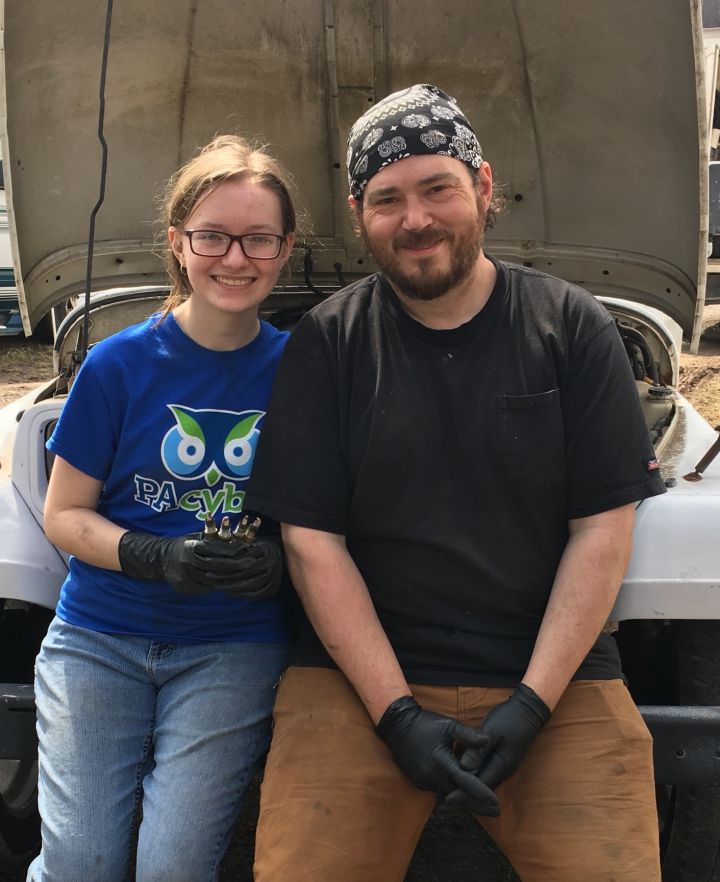 Morgana with her dad, Chris, fixing up her Jeep, a project they have been working on together for a little over a year. 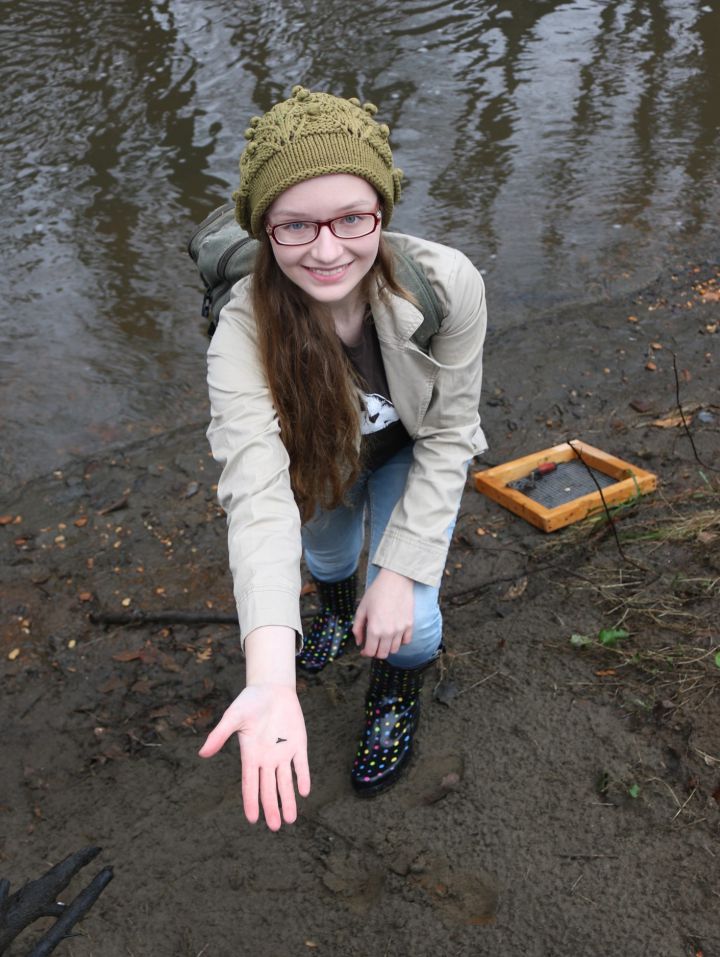 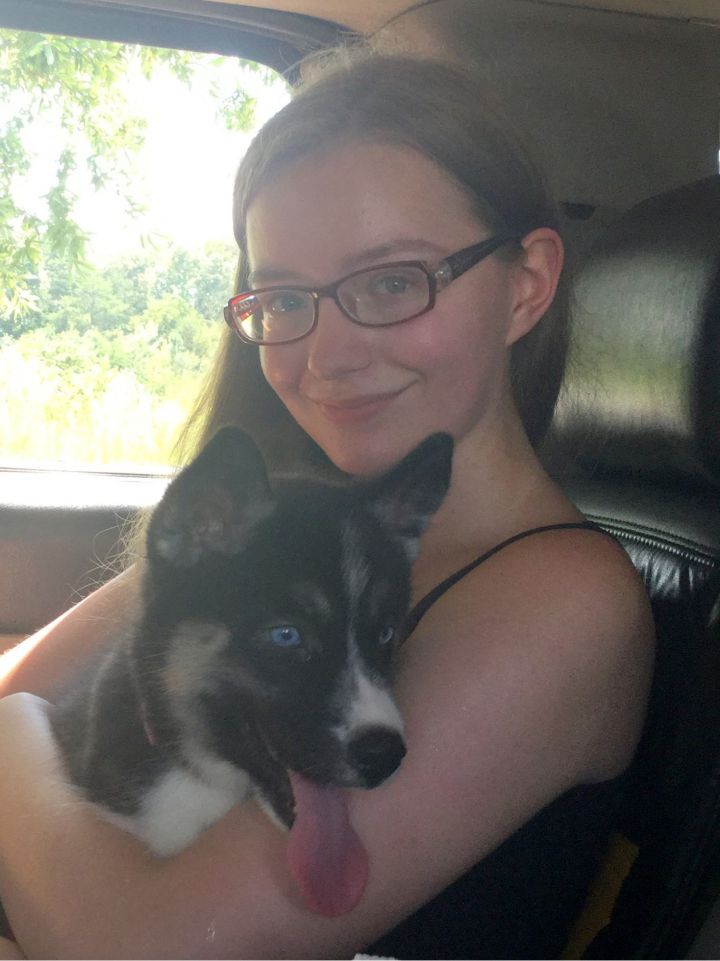 Morgana during a family trip to North Carolina, where they adopted a husky puppy named Kaia. 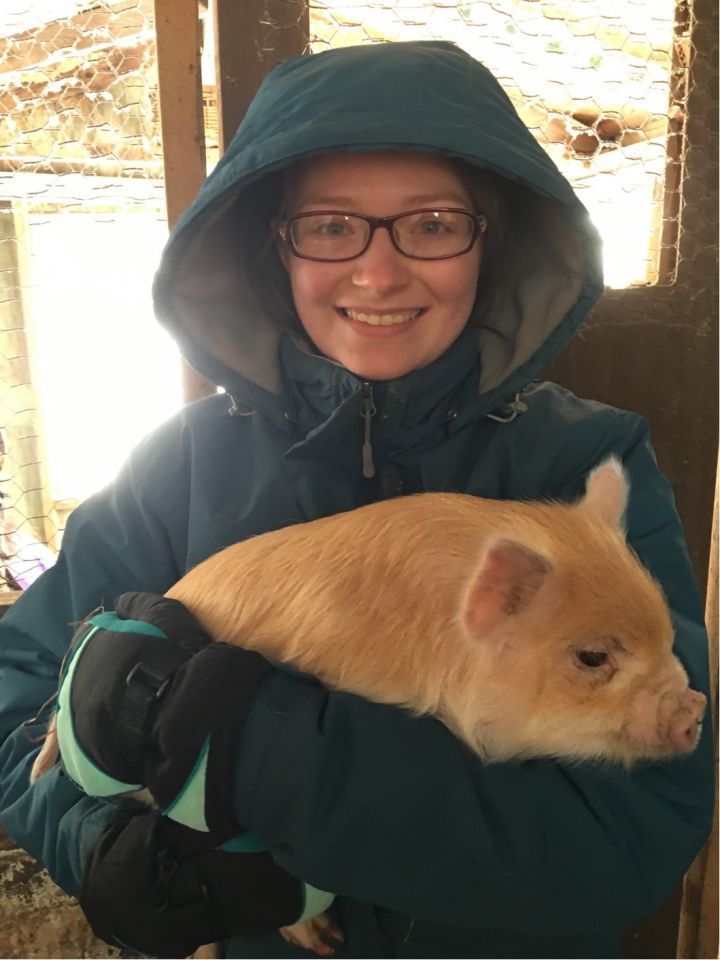 Morgana with the family piglet Ginger, one of three adorable piglets they have been raising. 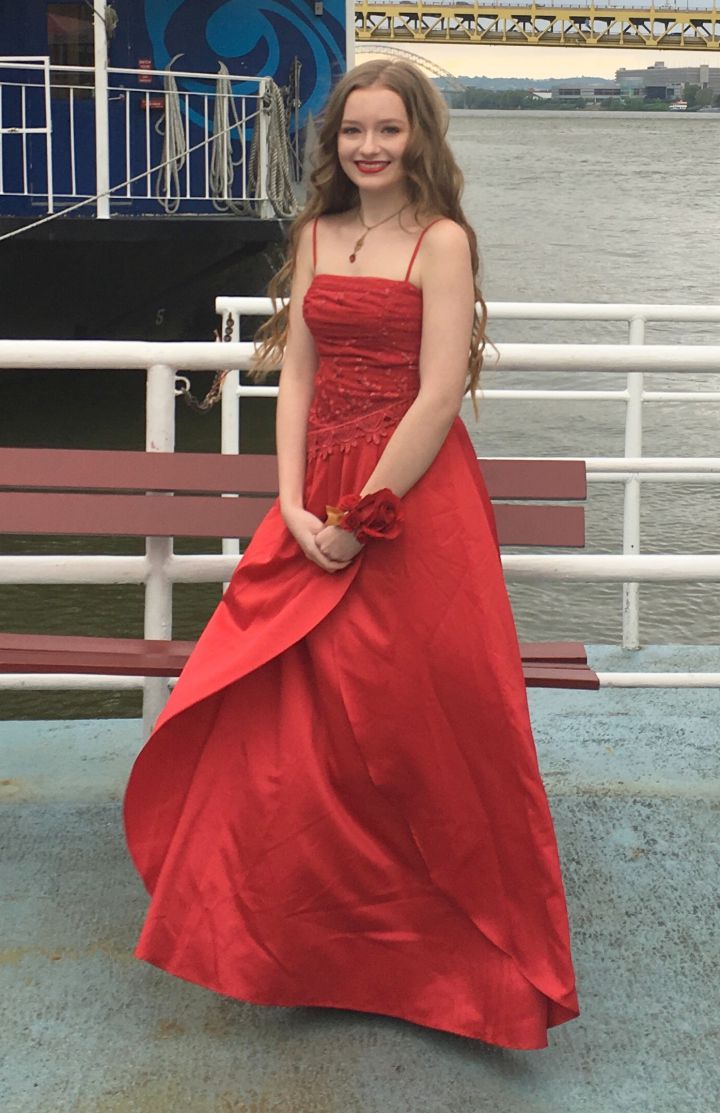