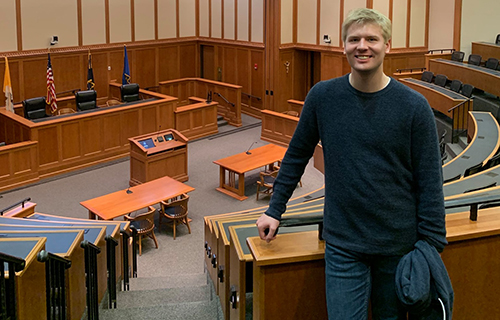 At the age of 25, former figure skater Andrew Nagode is working toward a second career as a lawyer. A student at Notre Dame Law School, he credits PA Cyber for enabling him to experience an enriched life both inside and outside of the classroom. His years at PA Cyber provided a flexible schedule so he could train with top figure skating coaches, grow his faith, and discover a blooming affinity for politics and law.

Nagode began figure skating at age 5 in Landenberg, Pennsylvania. His mother homeschooled him for a few years until she discovered PA Cyber. His family selected the self-paced course format that ultimately allowed him to train with famed skating coaches from across the country.

"With figure skating, if you want to be at an elite level, you have to do a lot of your training during the day," he says. "Many of my coaches were training Olympic-level figure skaters. They weren't available after school."

Nagode initially trained at the University of Delaware's renowned figure skating program. When he was 16, he convinced his parents to move to Colorado Springs so he could join the Broadmoor Skating Club and train with Tom Zakrajsek, a coach known for his technical expertise.

"I couldn't have done it without PA Cyber because I didn't know how long I was going to be there," he says. "I thought maybe it would be for a few weeks, but it ended up being two years." With Zakrajsek's help, Nagode mastered the notoriously difficult triple axel and took his skating career to new heights.

At age 18, he felt he had done the most he could with the sport. "I had been to nationals a few times, won a regional championship, and placed at sectionals. My coach felt I could do more with the sport, but it would have required a four- to six-year commitment. I had other ambitions I wanted to pursue. I'm happy I decided to retire at that point because I certainly wouldn't be in law school right now."

It was around this time when he also retired from high school—he graduated from PA Cyber in 2014 as an honor student. 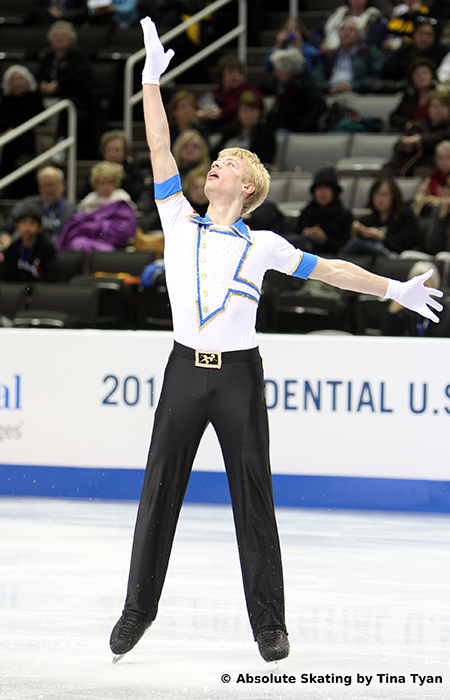 Even though most of Nagode's youth revolved around figure skating and school, he found time to explore law. Overhearing adults discuss politics at the skating rink piqued his interest initially. At age 12, he volunteered for Hillary Clinton's 2008 presidential campaign. He then became president of the YMCA's Youth and Government delegation in West Chester. Inspired by his time at PA Cyber, he advocated for enhanced school choice opportunities at the program's mock legislative session held annually at the Pennsylvania State Capitol.

Nagode studied politics at The Catholic University of America in Washington, DC, where he was able to grow both spiritually and academically. "I loved the experience," he says. "The university provided me with a unique opportunity to not only focus on my academics but also my values and the way I see the world."

While an undergraduate student, Nagode interned on Capitol Hill for longtime Pennsylvania Congressman Joseph Pitts and spent a summer with a conservative think tank, The Heritage Foundation, where he focused on defense spending policy and Pentagon reform efforts. While working alongside lawyers, he considered becoming one himself.

He also had an experience that solidified his desire to explore the intersection of law, religion, and public policy. He attended a rally at the U.S. Supreme Court in support of the Little Sisters of the Poor, a group of Catholic nuns who serve the poor and elderly. At the time, the nuns were involved in litigation to receive a religious accommodation against the federal contraceptive mandate.

"In that moment, I realized it's important to have attorneys stand for causes they care about," he says.

A Calling to Litigation

After completing his bachelor's degree, Nagode worked as an assistant at a large international law firm, McDermott Will & Emery, where he learned what it really meant to be a lawyer. He then applied to his top choice for law school, the University of Notre Dame, and got in.

He presented an exceptional story on his law school application with figure skating in his background. "That's a unique experience I wouldn't have had without my PA Cyber education," he says.

Now in his second year of law school, Nagode studies under top experts in the legal field, many of whom clerked at the U.S. Supreme Court. He serves as a staff editor for Notre Dame's Journal of International & Comparative Law.

Nagode feels that it's important for lawyers to be exposed to many different ideas and ideological perspectives. "My job is to defend a client the best I can, irrespective of his or her background."

Last summer he interned at the US District Court in Alexandria, Virginia, where he assisted with criminal and civil cases. While he is unsure which specific area of the law he is being called to, he is especially interested in litigation. Litigation suits him because, as a former competitive figure skater, he never shies away from competition.

For online students who want to get into a stellar university, he advises them to work with their academic advisors to make sure they are challenging themselves. "Don't just stay at home doing your schoolwork," he adds. "Experience the world. Use that flexibility to your advantage." He also advises PA Cyber students who are interested in law school to begin building a solid academic foundation early on in their careers.