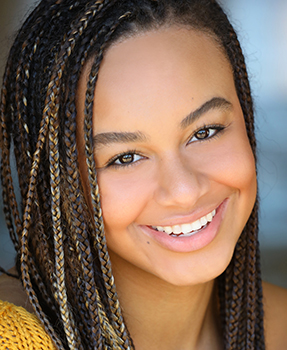 PA Cyber alumna Nia Sioux, 20, has entertained fans around the globe since she was a child cast member in Lifetime’s docu-series Dance Moms. Today she is a dancer, actress, author, activist, and podcast host. This May, Ms. Sioux was recognized as a “30 Under 30 Changemaker” by The National Alliance for Public Charter Schools (National Alliance) for using her immense social media platform to encourage other young people to believe in themselves and pursue their dreams.

“It makes me really happy that people see what I’m doing as actual change,” says Sioux. “People may not realize the impact that being positive on social media makes because there’s so much negativity on there.”

The National Alliance recognized 30 young leaders who use their ideas, talents, and platforms to advance educational and economic opportunity. The “30 Under 30 Changemakers” are students, activists, educators, and school leaders from across the country who bring a meaningful impact to their various communities. Some recipients are as young as 11 and 12. “To be among such cool and innovative people, it’s an honor,” says Sioux.

Nina Rees, president and CEO of the National Alliance, says, “We are proud to honor and lift up changemakers like Nia Sioux, who is one example of students and leaders who have demonstrated the strength and promise of the charter school movement over the last 30 years.”

Growing Up in the Spotlight

Sioux started dancing at age 3. She and her mother Holly Frazier joined Dance Moms, which first aired in 2011 when Sioux was just 10 years old. They remained on the show for seven of the series’ eight seasons. “Dance Moms is a huge part of where I am today,” she says. “Unfortunately, the negative outweighed the positive. I was made out to be a weak dancer and not as good as the other people on the show, and I don’t want anyone to ever feel that way. I think that’s part of the reason why I try to be as positive as I can.”

In 2020, Sioux published the children’s book Today I Dance, which captures the joy of dance and centers around inclusivity. “This book is a reminder not only for me but to others to remember why they started what they love,” she says.

She starred in the TV series The Bold and the Beautiful in 2018–2019, and she is in the new digital series, I Am Mortal, expected to release later this year.

Last spring Sioux launched a Spotify podcast called Adulting with Teala & Nia with her friend and fellow YouTuber Teala Dunn. On the podcast, the friends figure out adulthood, and they share their experiences in a fun and lighthearted way. “Whoever said adulting was fun, they lied to us,” laughs Sioux.

“One of our goals for the podcast is to encourage not only young people and but also young people of color to be in the spotlight,” she says. “There’s not enough representation in any realm and definitely not in the entertainment circle.”

On her Instagram page with 5.6 million followers, she inspires and educates her audience by spreading positivity. For Role Model Mondays, she highlights ordinary people doing extraordinary things. “Everyone is so unique and has power in their own ways,” she says. “I think it’s important for people to realize how much power they hold and how much they can do.

Balancing School and a Career

Sioux enrolled at PA Cyber in 2017 as a junior because she needed a flexible education program that would allow her to meet the demands of her career. She traveled between Pittsburgh and Los Angeles for work during high school. In her senior year, she sometimes worked 12–14 hour days.

“The beauty behind PA Cyber was how flexible it was…but also getting a good education and actually learning things that I wanted to learn about,” she says.

She graduated from PA Cyber in 2020 and enrolled at UCLA where she studies American literature and culture. When reflecting on her freshman year at UCLA, she says that PA Cyber gave her an edge since her college classes ended up online because of the continuing pandemic.

“I didn’t really know how to do school online before PA Cyber. But after doing it, it definitely prepared me for college. I learned to adapt quickly to the online environment.”

Sioux is passionate about advocacy. She is proud of her work as a youth ambassador for When We All Vote, as reflected by her efforts to engage first-time voters to register and vote in the 2020 election. “I love working with organizations and getting messages out there,” she says.

She credits her parents for inspiring her to make a truly positive impact on the world around her. “They’re the ones who ingrained in me to serve others. I’m really passionate about helping other people and helping them see their worth.”

When asked who her top role model is, she quickly says her mother. “I couldn’t have asked for a better mother. She’s the definition of a strong black woman, and she has done incredible things. On top of that, she’s a good person and cares a lot about people.”

Sioux has always been a goal setter, but the pandemic has taught her that life takes unexpected turns. “I’m not going to stress out about achieving this goal or that goal because it’ll happen with time. Nothing is promised. I just try and take it day by day.”

There is no doubt that this changemaking PA Cyber alum will continue to achieve her goals while entertaining us and advocating for her community along the way.