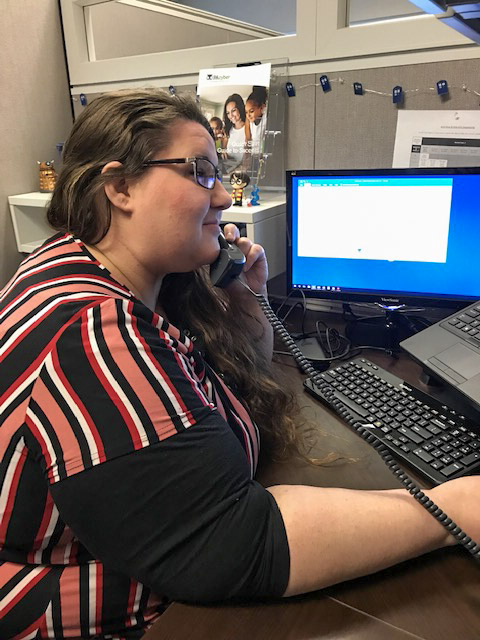 Kris Whitehair dreamed of returning to PA Cyber in some capacity after graduating in 2010 and is appreciative of the opportunity to inspire the next generation of students.

About a month ago, Whitehair began living out her dream working as an Academic Advisor at the Philadelphia Regional Office in Crum Lynne, bringing her back to the institution she left almost a decade ago.

"It's great. It's fantastic," she said. "It's what I've wanted since I've been in college—to come back and work at PA Cyber."

The oldest of her siblings, she was in eighth-grade living in Glen Rock, PA, when she initially began attending PA Cyber. Her mother withdrew her three daughters from traditional school, dissatisfied with their local school district.

"It was back when cyber schools were just kind of starting. No one had really heard about it," she said.

Whitehair was interested in attending cyber school, and it turned out to be a good match. She appreciated the flexibility PA Cyber gave her to achieve her goals. She was able to work during the day and complete her schooling in the evening. In between work and school, she said PA Cyber always gave her opportunities to meet others and enjoy activities outside of classes.

Back then, Whitehair had to travel to the Midland office, but today she lives closer to Harrisburg's regional office. She commutes three hours to work, but plans to move closer soon.

A large part of her reward in returning, she said, is that she gets to make a difference in the lives of students and equip them with the tools needed to succeed — just as someone did for her. It's an example she now hopes to follow.

"My instructional supervisor, Mike Makowiecki, really worked with me and pushed me. I'm the first in my family to really go to college and graduate from college. He really instilled a love of learning and I hope to give back."

Makowiecki, who is now the supervisor of student attendance, said Whitehair was one of the first students he had when he got started and he remembers offering strong encouragement. Back when he was an academic advisor, his job was to speak to parents, go over how their students were doing, and encourage them to turn in work.

He remembers speaking often with Whitehair's mother, Joy, and her siblings, Chanda and Ashley, and once meeting the entire family at a graduation outing. Both sisters also graduated from PA Cyber and one has a kindergartener who just enrolled this year.

"You figure, she came through here – and her sisters – and she went onto college. She must have done something right here, because you have to keep at least a 3.0 grade point average to be a teacher, now she has all her certifications. She's doing great. I think that's fantastic," Makowiecki said.

"She's heard all the excuses, so now she'll be very productive at it because the kids can't pull the wool over her eyes. She's been there, done that, and heard it."

Makowiecki was surprised when word got around that she was hired. He called her up right away to congratulate her. Whitehair said she was delighted to hear from him.

"It was surreal. I felt like a student again," she said.

Whitehair holds a bachelor's degree in education from Millersville University in Lancaster with certification in special education preK-8 and early childhood education preK-4. As soon as she is able, she plans to pursue a master's degree.

This profile is part of an ongoing series featuring PA Cyber alumni.